The Other Cohutta Springs

Cohutta Springs is on old maps in several places. The "other" Cohutta Springs is west of the one we've talked about. It's in the Tenth District, Third Section of Murray County, on Georgia Highway 225, and is better known as "Colvard's." The place name of Cohutta Springs came about because there were several mineral springs. Their source was the nearby Cohutta Mountains. The springs became popular as watering places. Boarding houses and resorts sprang up in the area. Little towns began to be named for the springs. Post offices opened and closed nearby. As one or the other area became frequented by residents and tourists, the place names began to appear on maps. The main part of this site explores the Cohutta Springs resort area that sits right at the foot of Grassy Mountain (just off of U.S. Highway 411 in Crandall, Georgia). The other Cohutta Springs (or Colvard's) is in the northwestern part of Murray County, on Georgia Highway 225. Old Doc Colvard once owned a plantation there. The antebellum plantation (privately owned) still sits at the crossroads there. The wellspring is gone. Earlier owners of the plantation were Waterhouse and McCroskey. It was never famous, but it was mentioned here and there in Civil War correspondence. That area was more prominent in census (because of the early post office there), so genealogists will do well to take a look at it. We'll explore that "other" Cohutta Springs as we travel through Murray County's history. To get a better idea of these various areas, take a look at our Maps page.
Posted by Southern Muse at 3:56 PM

Explore the history of a bygone community. Hidden out in the woods of a private property in the valley beneath Grassy Mountain are the ruins of an old North Georgia Community, Cohutta Springs. Once, people came to the old mineral springs there, a "watering place," as they called it... 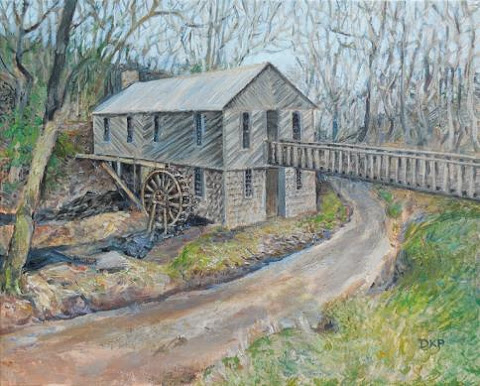 Cohutta Springs is a historic community in Murray County, Georgia. The once thriving town has disappeared into the Chattahoochee National Forest. Some businesses in the area still bear the name of Cohutta Springs, so the old town is not completely forgotten...

Visiting watering places in summertime was the fashionable thing to do, many years ago...